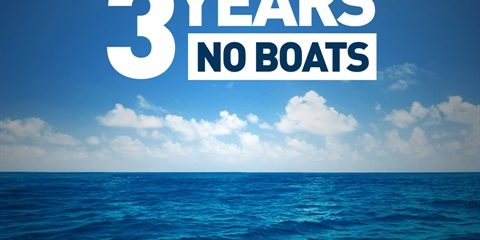 Operation Sovereign Borders (OSB) has been an outstanding success thanks to the dedication and determination of the men and women of the 16 Commonwealth agencies that make up the Joint Agency Task Force implementing OSB.

Boats were arriving at the rate of 37 a month in early 2013 and over the preceding five year period there were more than 800 of them carrying over 50,000 IMAs.

Dealing with those people has cost the Australian taxpayer more than $14 billion to date. These costs continue to mount as the current Government deals with what’s known as the ‘Legacy Caseload’ – the 30,000 IMAs who arrived, but were not processed by the previous administrations.

Had the Coalition not mounted OSB – the boats and illegal arrivals would still be coming.

OSB’s success has been achieved at a time of unprecedented mass movement of people with an estimated 65 million displaced persons worldwide.

There were many who said it couldn’t be done. That turning-back boats was an impossibility, that there was no way to end the people smuggling trade. The chorus was loud and constant.

Fortunately for Australia, the naysayers were wrong. We have stopped the relentless flow of boats – but attempts to breach our borders remain.

Three years on, the danger is that as a nation we now become complacent. Problem fixed, move on. It was the mistake that was made in 2008.

We cannot afford to do that again.

The reality is that the boats have continued to try to breach the border protection measures in place under OSB – though at vastly lower numbers.

Since the last successful people smuggling boat arrived in July 2014, OSB has stopped 18 boats carrying 361 potential IMAs. These boats have been turned-back where it was safe to do so or their occupants were returned via air.

Importantly there have been no lives lost at sea en-route to Australia in that time.

With the support of our international partners we have also seen 539 people smugglers arrested across our region as part of OSB, significantly crippling these criminal networks.

But today somewhere in South or South East Asia a people smuggler is contemplating how the organised criminal ring he is a part of can entice people to pay to board a boat and take the risk that they can survive a dangerous journey, on an unseaworthy craft, to try to reach Australia.

The smugglers watch and wait for any circumstance in Australian domestic politics that they can exploit to claim the seaway to Australia is “open” again.

The number of people waiting in Indonesia alone is estimated at 14,000. There are many thousands more in other countries across the region that would be prepared to undertake an illegal venture by sea.

We cannot return to the days when Labor enabled people smugglers to usurp the Australian Government and decide who could come to Australia.

Secure borders, as Europe has learned at great cost, are an important part of national security.

It is a concerning fact that a large number of IMAs who could afford to pay the people smugglers to bring them illegally to Australia arrived here without any identification. They needed identity documentation to fly into Indonesia, but disposed of it on the sea journey to Australia. Why?

We have every right to know who wants to come to our country and to control how and when.

As we continue to see in the Mediterranean, tens of thousands of people are prepared to undertake dangerous journeys. More than 2300 have died on those journeys this year while more than 5,000 were lost last year.

A few short years ago people were dying in the oceans off Australia.

Australians will never forget the horrifying scenes of a flimsy boat being dashed to pieces on the rocks at Christmas Island in 2010, a tragedy which claimed 50 lives.

OSB has ended those tragedies by cutting off the sea route to Australia. It has succeeded where many said it could not, but that success is tested month by month.

We now have an unprecedented number of surface, aerial and satellite surveillance assets monitoring our maritime borders. OSB will be needed far into the future.

As a nation we must remain resolute and vigilant.