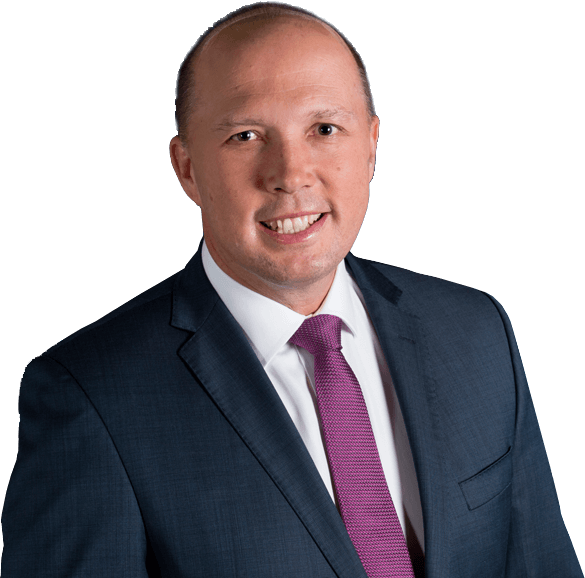 Peter Dutton is the Member for Dickson.

Peter Dutton was sworn in as the Minister for Defence on 30 March 2021 and served in the Morrison Government.

Peter sat on the National Security Committee of Cabinet for 6 years. He was also a member of the Expenditure Review Committee and the Prime Minister’s leadership team.

Peter has also previously served as the Minister for Immigration and Border Protection from December 2014 until August 2018 overseeing Operation Sovereign Borders – stopping the boats, getting every child out of detention, closing the Manus Regional Processing Centre and overseeing the special intake of 12,000 refugees from the Syria and Iraq conflicts.

Prior to that appointment, Peter was Minister for Health and Minister for Sport from September 2013 establishing the $20 billion Medical Research Future Fund.

Peter is married to Kirilly and is the proud father of Rebecca, Harry and Tom and lives in Dayboro in the Dickson electorate.

First elected to the Australian Parliament as the Member for Dickson in November 2001 at age 30, Peter became one of the youngest Ministers since Federation when appointed to the Ministry by Prime Minister John Howard in 2004.

In January 2006, he was promoted to Minister for Revenue and Assistant Treasurer.

Before his election to Parliament, Peter was a successful small businessman and employed a staff of 40.

Peter also served as a Queensland Police Officer for a decade and worked in the National Crime Authority and Drug and Sex Offenders’ Squads.