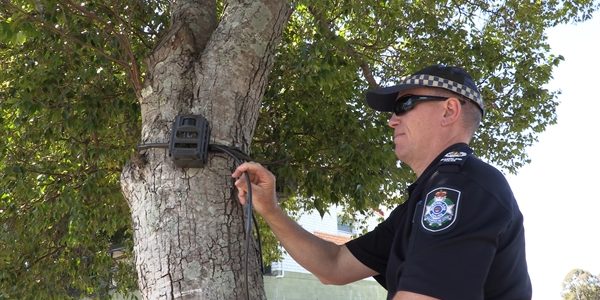 The police can deploy the cameras in crime hotspots; use them to combat anti-social behaviour such as alcohol-fuelled violence in public places or hooning on suburban streets.
They can also be deployed discreetly and used to gather evidence as part of an ongoing investigation.
The cameras were provided under a $20,000 grant from the Federal Government’s Safer Communities Fund to Moreton Bay Regional Council.
The Member for Dickson Peter Dutton was shown how the cameras operate by Petrie Police officers as they readied to deploy the devices.
Mr Dutton said they would help make communities in the Dickson safer.
“Our police can not only use these CCTV devices to catch criminals, but also to prevent crime by placing them in areas where there are concerns criminal activity could occur,” he said.
Suburbs covered by the Petrie Police division include: Bray Park, Brendale, Cashmere, Joyner, Kallangur, Kurwongbah, Lawnton, Petrie, Strathpine, Warner and Whiteside.
Mr Dutton said another round of funding was open under the Safer Communities Fund with applications able to be made until November 14. Community organisations can apply for grants up to $1 million to address crime or security issues.
Note: Two pictures attached. Senior Sergeant Peter Brady of Petrie Police shows Peter Dutton the new cameras and how they can be deployed.
Category: Media Releases19 October, 2017