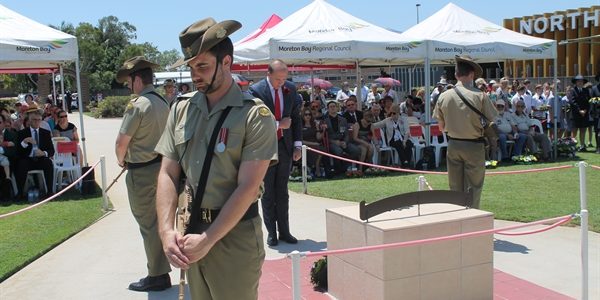 On Remembrance Day we pause to honour those who made the ultimate sacrifice for our country. It was an honour to lay a wreath at the Pine Rivers RSL Sub-Branch's service this year. Congratulations to all those who organised the service and a special mention to the students from Kurwongbah State School and Dakabin State High School who performed the National Anthem. Lest we forget.

At 11 am on 11 November 1918 the guns of the Western Front fell silent after more than four years continuous warfare. The allied armies had driven the German invaders back, having inflicted heavy defeats upon them over the preceding four months. In November the Germans called for an armistice (suspension of fighting) in order to secure a peace settlement. They accepted allied terms that amounted to unconditional surrender.

The 11th hour of the 11th day of the 11th month attained a special significance in the post-war years. The moment when hostilities ceased on the Western Front became universally associated with the remembrance of those who had died in the war.
Australian War Memorial (https://www.awm.gov.au/commemoration/remembrance/tradition/)